Papers, communications and reviews… our recent published work is here.

Redox pairs of transition metal complexes are often involved in small molecule activation in response to modern energy challenges as well as in other areas of electrocatalysis. Within such a family of molecular electrocatalysts, ligand substitution is a means of varying catalytic efficiency, best gauged through catalytic Tafel plots relating overpotential and turnover frequency. In practice, efficient molecular catalysis involves multielectron–multistep processes. It is in this framework that we discuss through-structure inductive substituent effects. What the best choice is for the reference thermodynamic index, how the global substituent effect may be expressed as a function of this index, and how it may be dissected into individual effects assigned to each of the reaction steps are challenging questions that are addressed and resolved here for the first time. The discussion is illustrated by the effect of successive phenyl perfluoration and of o,o′-methoxy substitution of the FeI/0 tetraphenylporphyrin catalysts of the CO2-to-CO electrochemical conversion. Consequences on the relative position of the catalytic Tafel plots are also examined. This analysis of through-structure electronic effects is a necessary preliminary to the investigation of substituent through-space effects (electrostatic, H-bonding) because, albeit of different nature, they may occur simultaneously. Investigation of these two aspects of substituent effects and of the rules that emerge thereof pave the way to future imaginative design of catalysts for the CO2-to-CO-conversion and also for any other molecular catalytic reactions. 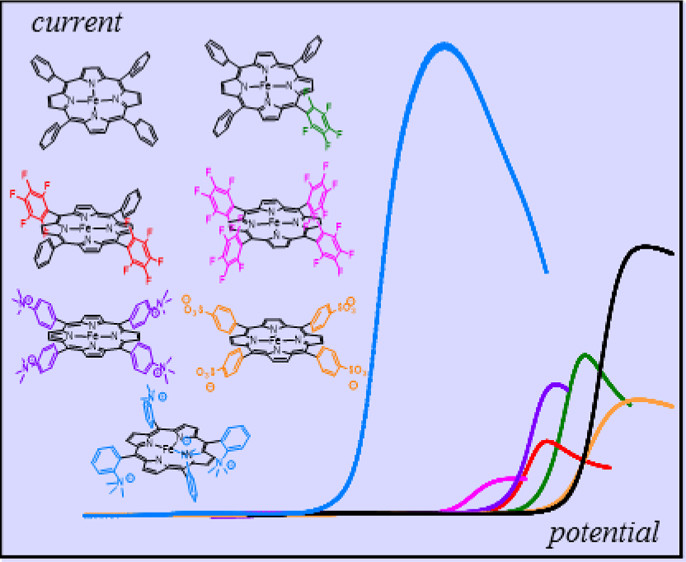 The starting point of this study of through-space substituent effects on the catalysis of the electrochemical CO2-to-CO conversion by iron(0) tetraphenylporphyrins is the linear free energy correlation between through-structure electronic effects and the iron(I/0) standard potential that we established separately. The introduction of four positively charged trimethylanilinium groups at the para positions of the tetraphenylporphyrin (TPP) phenyls results in an important positive deviation from the correlation and a parallel improvement of the catalytic Tafel plot. The assignment of this catalysis boosting effect to the Coulombic interaction of these positive charges with the negative charge borne by the initial Fe0–CO2 adduct is confirmed by the negative deviation observed when the four positive charges are replaced by four negative charges borne by sulfonate groups also installed in the para positions of the TPP phenyls. The climax of this strategy of catalysis boosting by means of Coulombic stabilization of the initial Fe0–CO2 adduct is reached when four positively charged trimethylanilinium groups are introduced at the ortho positions of the TPP phenyls. The addition of a large concentration of a weak acid—phenol—helps by cleaving one of the C–O bonds of CO2. The efficiency of the resulting catalyst is unprecedented, as can be judged by the catalytic Tafel plot benchmarking with all presently available catalysts of the electrochemical CO2-to-CO conversion. The maximal turnover frequency (TOF) is as high as 106 s–1 and is reached at an overpotential of only 220 mV; the extrapolated TOF at zero overpotential is larger than 300 s–1. This catalyst leads to a highly selective formation of CO (practically 100%) in spite of the presence of a high concentration of phenol, which could have favored H2 evolution. It is also very stable, showing no significant alteration after more than 80 h of electrolysis.

The United Nations conference on climate change (COP21) held last December in Paris illustrated public awareness regarding our current climate change and future energy issues. Solving these global challenges will involve various actions, from basic science to governmental regulations. In terms of technological development, sustainable scenarios aim at progressively replacing the fossil fuel economy that thrived during the 20th century. Yet, the lack of incentives and low price of oil are leaving the consumer with cheap and convenient technology solutions based on the combustion of fossil fuels. In this context, public research agencies should provide a long-term vision and endorse the funding for new, alternative routes. 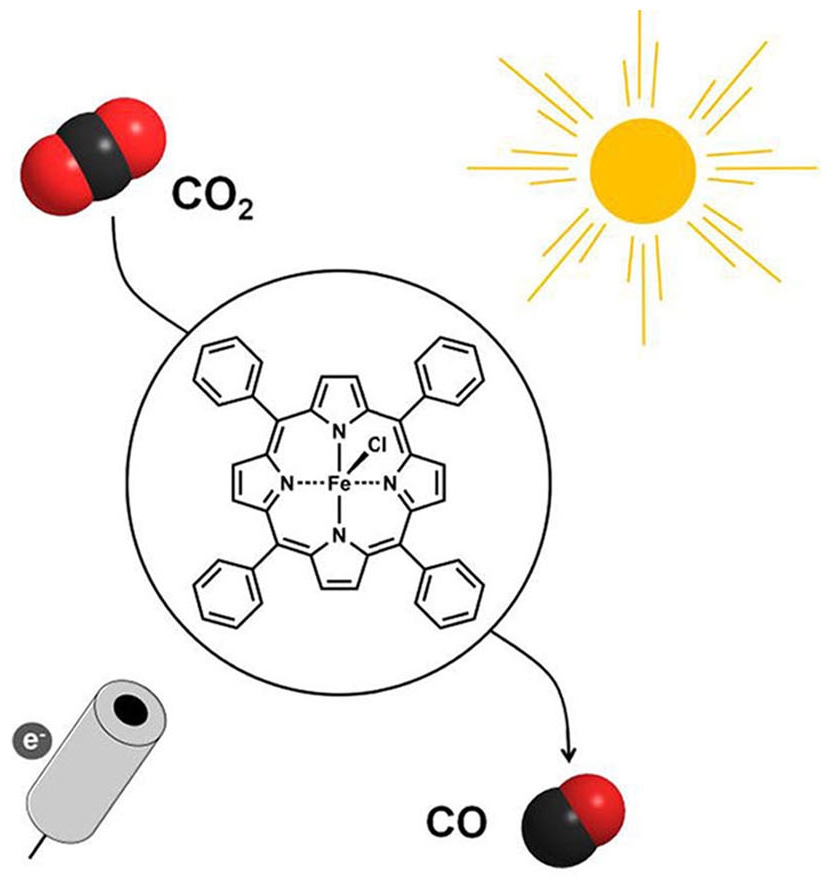 Reduction of CO2 is a fruitful approach for storage of renewable electric energy as well as for the production of value added chemicals. Using variously substituted iron tetraphenylporphyrins and iron and cobalt macrocyclic pentadendate N5 complexes electrochemically or photochemically reduced to their active states, selective and efficient molecular catalysis of the CO2-to-CO and of the CO2-to-HCOOH conversion was achieved at low overpotential. From fruitful joint experimental and mechanistic studies rooted in the analysis of cyclic voltammograms, the mechanisms for catalysis were fully deciphered, allowing not only to give a complete picture of the catalytic processes but also to identify the main parameters for optimizing the catalyst structure. Efficient CO2 catalysis was performed not only in aprotic but also in aqueous conditions, opening the way to the design of electrochemical or photoelectrochemical cells, a key step for future applied devices.

The covalent grafting of an Fe porphyrin on carbon nanotubes led to efficient electroreduction of CO2 into CO in water (pH 7.3). CO was obtained with high selectivity and turnover at 0.5 V overpotential. The grafting strategy may be further extended to various conductive and semi-conductive surfaces. 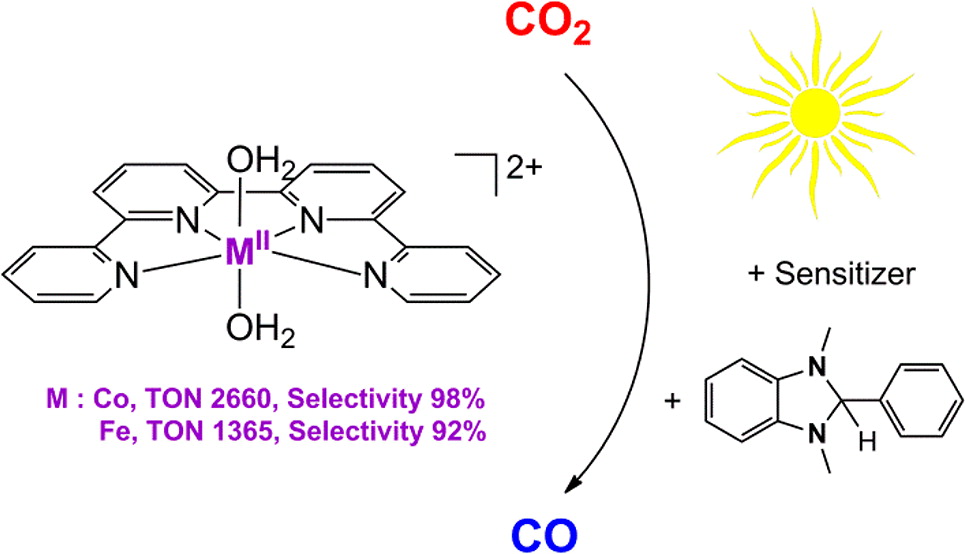 The design of highly efficient and selective photocatalytic systems for CO2 reduction that are based on nonexpensive materials is a great challenge for chemists. The photocatalytic reduction of CO2 by [Co(qpy)(OH2)2]2+ (1) (qpy = 2,2′:6′,2″:6″,2‴-quaterpyridine) and [Fe(qpy)(OH2)2]2+ (2) have been investigated. With Ru(bpy)32+ as the photosensitizer and 1,3-dimethyl-2-phenyl-2,3-dihydro-1H-benzo[d]imidazole as the sacrificial reductant in CH3CN/triethanolamine solution under visible-light excitation (blue light-emitting diode), a turnover number (TON) for CO as high as 2660 with 98% selectivity can be achieved for the cobalt catalyst. In the case of the iron catalyst, the TON was >3000 with up to 95% selectivity. More significantly, when Ru(bpy)32+ was replaced by the organic dye sensitizer purpurin, TONs of 790 and 1365 were achieved in N,N-dimethylformamide for the cobalt and iron catalysts, respectively. 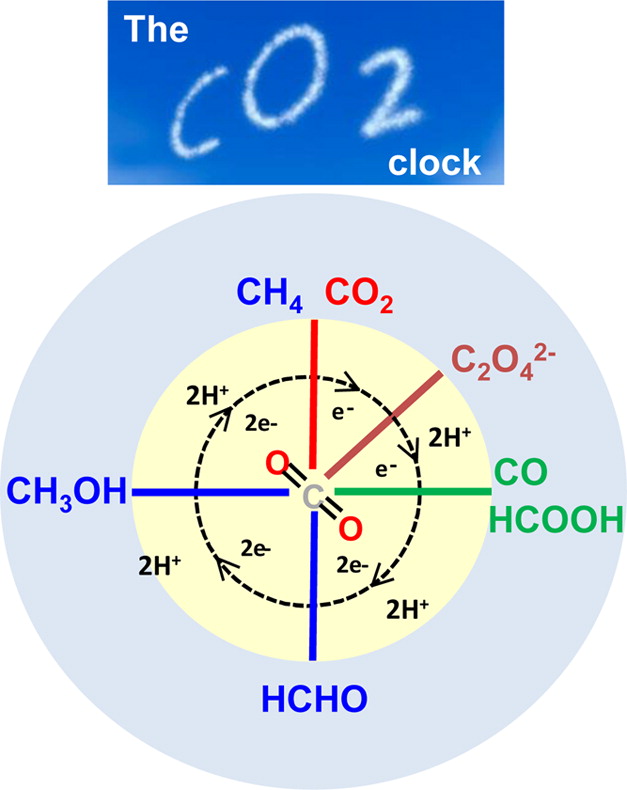 The quest to escape the fossil fuel economy and its share of local and global pollution as well as geopolitical disruptions including large-scale migrations of millions of people has presented chemists with new challenges requiring the use of alternative, renewable energy sources. This quest has a name: solar fuels.

Earth-abundant metal complexes have emerged as promising surrogates of platinum for catalyzing the hydrogen evolution reaction (HER). In this study, we report the design and synthesis of two novel nickel quinolinethiolate complexes, namely [Ni(Hqt)2(4, 4′-Z-2, 2′-bpy)] (Hqt = 8-quinolinethiol, Z = H [1] or CH3 [2], bpy = bipyridine). An efficient three-component photocatalytic homogeneous system for hydrogen generation working under visible light irradiation was constructed by using the target complexes as catalysts, triethylamine (TEA) as sacrificial electron donor and xanthene dyes as photosensitizer. We obtain turnover numbers (TON, vs. catalyst) for H2 evolution of 5923/7634 under the optimal conditions with 5.0 × 10−6 M complex 1/2 respectively, 1.0 × 10−3 M fluorescein and 5% (v/v) TEA at pH 12.3 in EtOH/H2O (1:1, v/v) mixture after 8 h irradiation (λ > 420 nm). We discuss the mechanism of H2 evolution in the homogeneous photocatalytic system based on fluorescence spectrum and cyclic voltammetry data.

Using a one-step electropolymerisation procedure, CO2 absorbing microporous carbazole-functionalised films of iron porphyrins are prepared in a controlled manner. The electrocatalytic reduction of CO2 for these films is investigated to elucidate their efficiency and the origin of their ultimate degradation.